By 2016, India had witnessed the large scale adoption of Aadhaar, one of the world’s most complex biometric systems, built using a scalable and OpenSource architecture1. Simultaneously, the potential of governments to reimagine themselves as citizen-friendly, high-tech public institutions that can deliver low-cost solutions to India’s complex challenges was becoming clearer2. It was against this backdrop that Samagra began its journey of democratizing technology product development for state governments with the aim to strengthen government functioning.

This post is about Samagra’s approach to building reusable OpenSource technology for state governments in India.

Our vision has been to create a layer of reusable OpenSource technology products that will serve as the government operating system.

In 2016, our consulting teams started working with the state governments in Haryana and Himachal Pradesh to manage a good governance program and to improve the quality of school education. We identified certain use cases2 that could be enabled by technology. At this point our approach had one key principle:

Our approach was influenced by the need to empower government engineering teams with technology products built using OpenSource tools that they could independently manage in the long term4.

We began building prototypes for these use cases. Often, a prototype helps government stakeholders to precisely imagine and articulate product requirements. For instance, we built a prototype for a scheme eligibility application that allows any citizen to update his/her basic details and get a list of schemes that s/he is eligible for and the steps to be undertaken to avail the scheme. 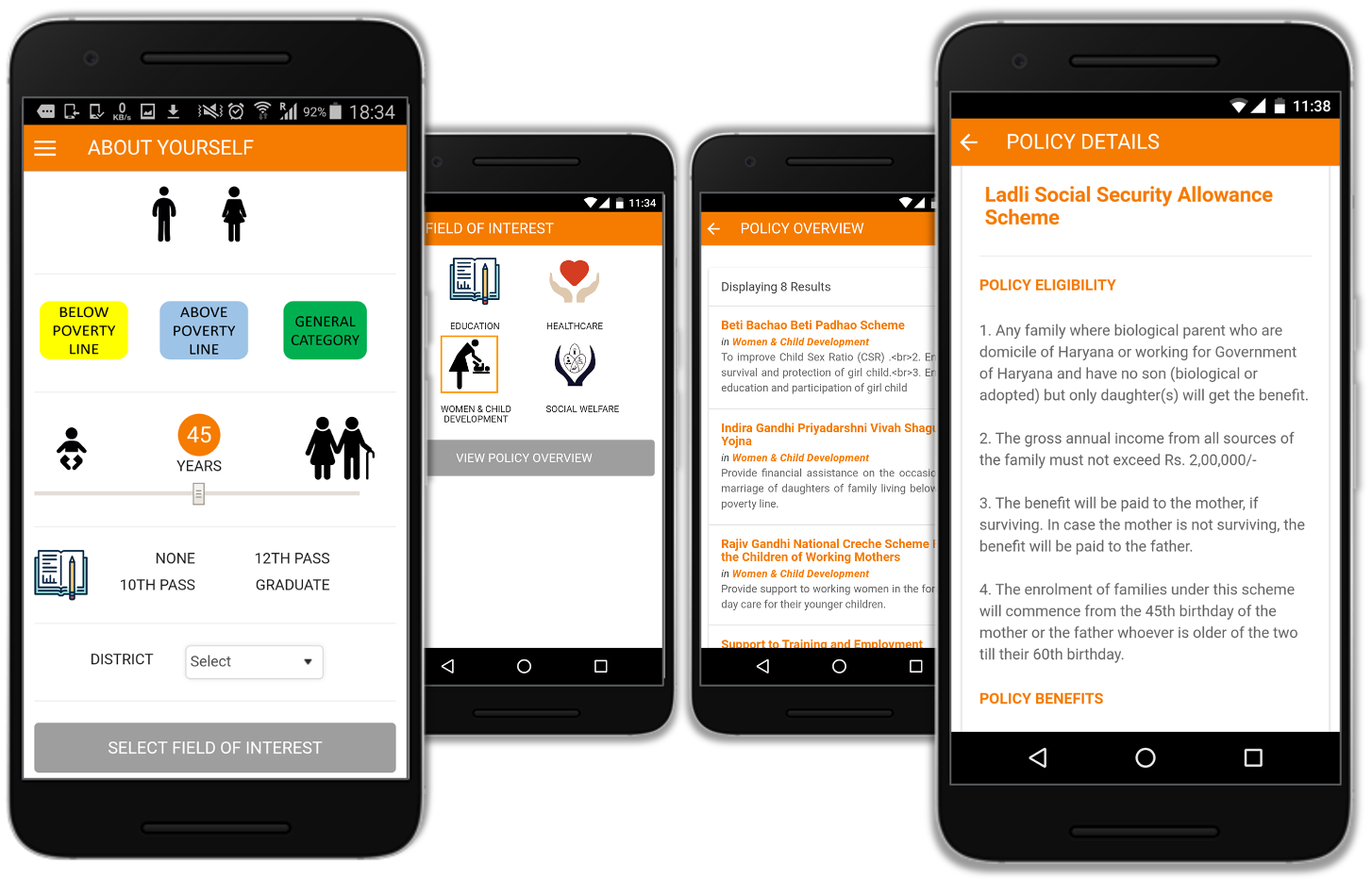 Within two quarters, we had built a strong MVP5 culture in the team and developed a few prototypes that we took to the state governments we had been working with. The feedback from the government indicated that we needed to delve deeper and understand variables that influence the deployment of these products within the governance ecosystem. We decided to get our hands dirty.

#Getting our hands dirty

In early 2017 we had the opportunity to set up the Digital Haryana Cell, to design and implement the digital roadmap of the state. The primary objective was to improve the speed and efficiency of government service delivery and to increase transparency and accountability within the system6.

Later in 2017, we started working with the Odisha State Agriculture Department7 to build a Decision Support System to empower the department to make data-backed policy and strategy decisions. We worked closely with the department to use technology to streamline supply chains for raw materials, provide customised pest advisories and deliver information about markets to farmers.

Through this period of 2017-18, we witnessed an increase in the use of technology across our other engagements in Andhra Pradesh, Haryana and Himachal Pradesh.

These experiences allowed us to:

We now had a clear perspective of the different challenges governments face while conceptualizing, building, deploying and sustaining technology projects. It also answered a lot of our questions about why8 certain government technology products:

After getting our hands dirty it was time to renew our focus on the vision with which we started this journey - to create a layer of reusable OpenSource technology products that will serve as the government operating system. This time around, we defined a structured approach to achieve our vision.

This approach had three key principles:

In 2019, we started detailing use cases from different governments that we were working with. We started with the education domain. We identified and prioritised school monitoring9 use cases across the state education departments we were working with. Based on these use cases, we created functional specifications of a product that can be used for conducting and reviewing school monitoring visits across states.

We then identified OpenSource tools that can be wired together to create a generic product for school monitoring. Through this journey we delved deeper into multiple open source tools and finally selected the ones that we felt were most suitable to the context we were working in. For school monitoring we used OpenDataKit for designing data collection forms, Metabase for visualising the visit data, ReactAdmin to manage all the administrator functions of the application, Sentry to track mobile application performance data. After building a proof of concept we piloted it extensively within the state and finally launched in June 2019. Since then this application has been used by over 2,500 monitoring officials to conduct 24,000 schools visits.

Once we had deployed the school monitoring solution in Himachal Pradesh, we then deployed it for the state education department in Haryana. The process of customizing the application for Haryana was fairly straightforward as we had already identified dimensions of configurability that would be critical for other departments to configure before using it themselves. For instance - a few key dimensions that we made configurable in the school monitoring solution were:

Therefore, within a few weeks Saksham Samiksha went from an idea to be implemented using a reusable OpenSource product to being live on the ground. Since August 2019, when the product was launched, approximately 12,000 monitoring officials and mentors have used this application to conduct over 72,000 visits. Today, anyone in the government can set up this monitoring solution within a few hours. 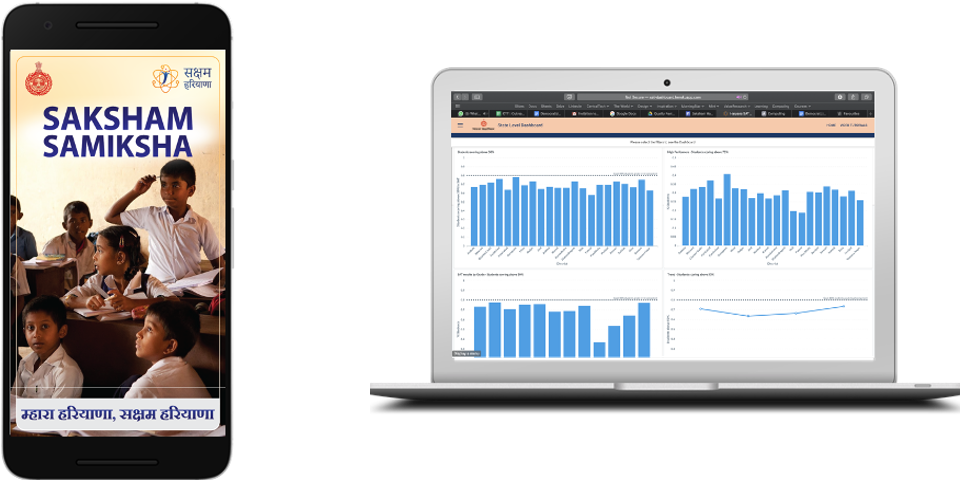 Vijay Kumar, Additional Block Resource Coordinator, Sirsa, Haryana states, “Samiksha is easy to use. The mentoring form is designed well as it is thorough. I also like how it allows us to capture discussions with teachers and headmasters, along with any classroom best practices being followed in the school.”

After creating our first school monitoring product, we created a reusable communication product Samwad that enables personalised SMS-based communication between teachers and parents. Teachers can send personalized and templatized SMS messages to parents to inform them about the attendance of their child, homework status, assessment results; and dates of an upcoming school holiday, parent teacher meetings, exams or a School Management Committee meeting. These are examples of the SMSs that Himachal Pradesh State Education Department finalized for their version of Samwad. Today Samwad is used by approximately 20,000 government teachers in Himachal Pradesh who have sent over 400,000 SMSs to parents. 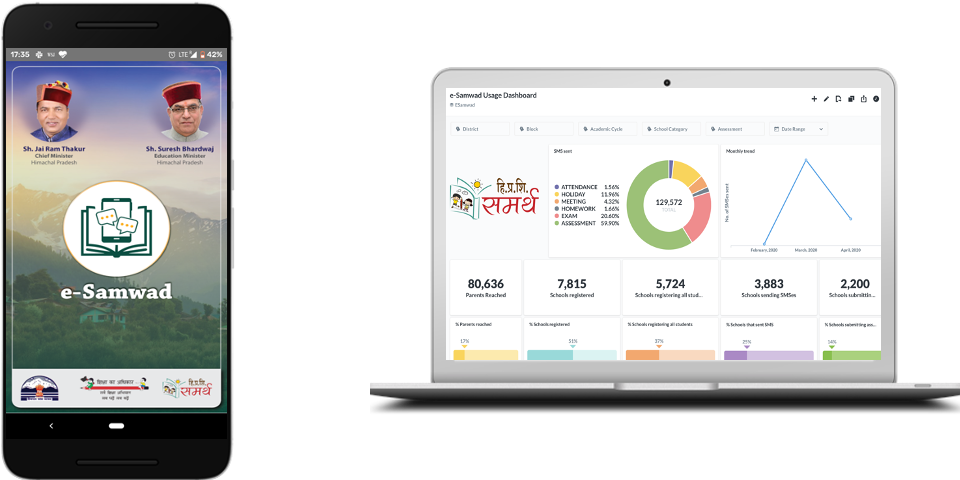 Samwad and its usage dashboards used by the State Education Department in Himachal Pradesh.

Over the past year we have engineered multiple reusable OpenSource products for the education, agriculture and skilling sectors and have launched these products across different states reaching over 55,000 government officials. Each of these applications are scalable and their performance can be closely monitored by the government teams 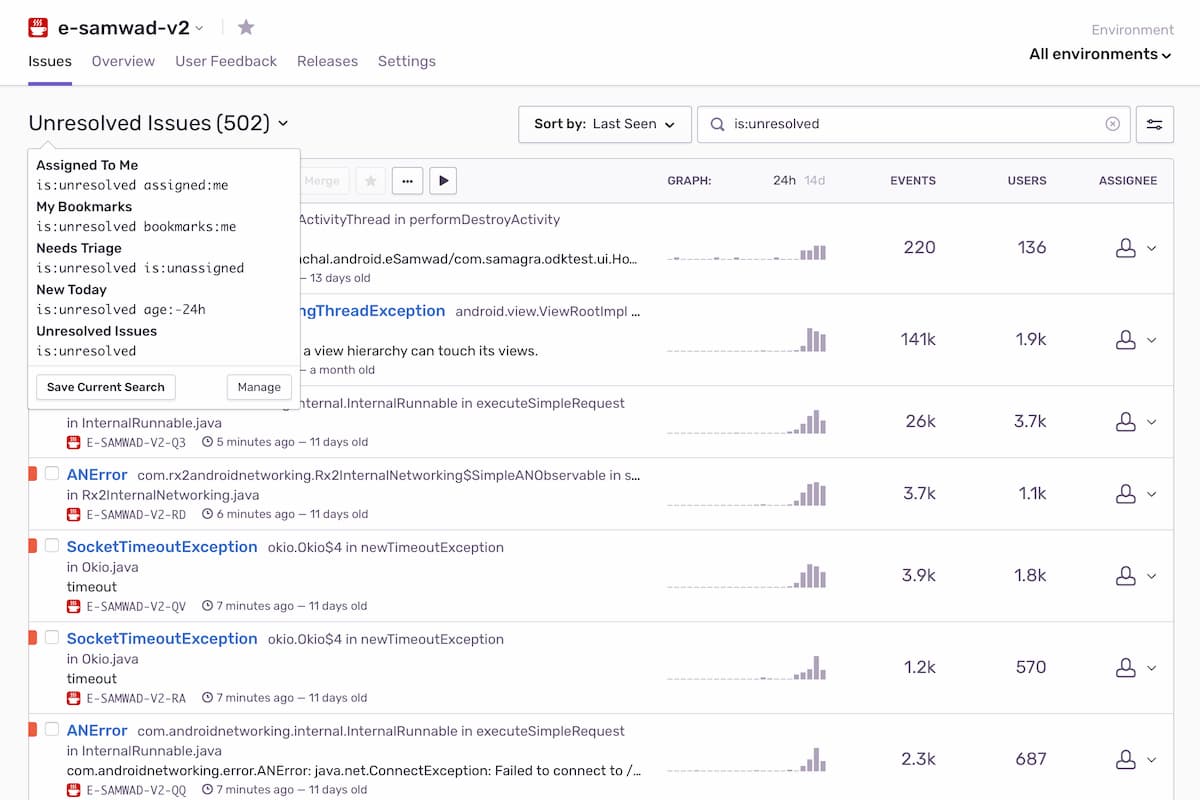 Samwad application tracker that identifies and shares details of issues that users may be facing while using the application. Before the user reports it the technical owners of the application would know.

Every state government has certain core systems that are used across all or some state departments. Examples of these systems include the Human Resource Management System (‘HRMS’) for managing all employee service records, Education Department Management Information Systems for managing all data related to schools, and service delivery platforms such as SARAL. Certain services are also provided by national government agencies such as the SMS gateways provided by the Centre for Development of Advanced Computing (‘CDAC’), remote sensing capabilities provided by the National Remote Sensing Centre (‘NRSC’), citizen feedback service provided by the Rapid Assessment System of the National e-Governance Division and more. Majority of these systems and services are hosted on digital infrastructure owned by the state or national governments.

Therefore, a key principle of our approach was to build product architectures that are interoperable with government systems and can leverage government services. Our objective here is twofold. First, to add value to the core governments systems and reuse government services as opposed to building additional systems that remain on the fringe as good-to-have-but-not-core systems and leverage services from high cost service providers. Second, to make products that are easily deployable on government infrastructure by government teams as opposed to having rigid deployments on specific or proprietary infrastructure. If these two factors are not accounted for in government product designs from the beginning, it becomes a challenge for governments to manage and make sense of information across disparate systems.

The following architecture diagram of Samwad illustrates how the product can leverage any SMS gateway (currently it is connected to the CDAC Gateway) and can be interoperable with any department database.

Read more about Samiksha, Samwad and Pariksha and the different components that are wired together to create these products.

The key ingredient to successful launches and scale up was close collaboration with each of the government departments we worked with. Governments often focus on launching technology products but fall short of building a long term vision for these products. We therefore have to include government stakeholders at each step of the product journey. If no one within the government understands the details of the product design, the potential for extensibility, scalability and reusability, then either the government would not be actively involved in developing the product further or the product evolution would be shaped by the incentives of technology service vendors who built the application. But if you collaborate in a structured manner, the outcomes are worth it.

In Himachal Pradesh, we showed a prototype of the school monitoring product to the state education department. The discussion was not only about the features of the prototype, but also the different OpenSource tools that were used to build the product. We explained the challenges and opportunities of using OpenSource tools. While the product was being built, the Samarth team worked with the government to assign functional and technical owners for this product within the government. A functional owner would manage all the configurations in the application and a technical owner would manage its technical maintenance. It was also important to have government technical infrastructure allocated10 for the product so that it could be immediately deployed on government infrastructure. Once the product was built we worked with district and block officials to pilot it extensively and assess feedback. This built a strong sense of co-creation.

Across all our projects we have focussed on strengthening government capability. Over the last few years we have had the opportunity to work with product and engineering teams of different state government departments on a range of issues such as:

In this process, we have focussed on creating a collaborative learning culture within government teams which will not only help them manage existing products but also reimagine and configure their own solutions using available OpenSource tools.

Our consulting teams have already started training government functional owners on how to use OpenSource tools such as ODK and Metabase that are extensively used in the products that we have engineered for them.

This is just the beginning and we believe that an OpenSource government operating system will be the new normal for governments of the future.